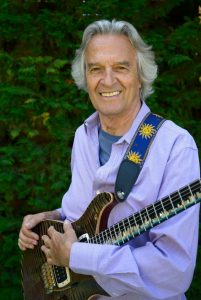 Whether or not you are a John McLaughlin fan, I’m sure you agree that he is an awesome musician!

When I first heard him with the Mahavishnu Orchestra, I remember thinking he was from another planet (lol). And that’s because as a teenage rock guitarist who had just been exposed to jazz , I had never heard anyone play guitar with such chops!

But to make a long story short, around the same time I also heard Wes Montgomery for the first time, and “bebop” stole my heart. As a result, John McLaughlin was delegated to the back burner. That is, until 20 years later after which I heard him improvising over some of the same standards I myself was playing! It opened up my perspective of what can be done over those recurring II-V-Is.

So, if you’re like me, a bebop oriented guitarist who always admired John McLaughlin from a distance but felt his lines had no place in the context of mainstream jazz standards, this lesson might just change this! It features 18 phrases that John played primarily over standards such as “Stella by Starlight” which are sure to add a new dimension to your solos!

The “18 Licks by John McLaughlin” Files can be downloaded for $10.00.  The download includes:  A 6 page PDF featuring regular notation and TAB with detailed fingerings of all licks and “Blue Bossa” solo, MP3s of all the licks & solo, and a Band In A Box file which you can use to practice all of it if you have the software.

For those that don’t use PayPal…when you click the button below, it will give you the option to pay with any major credit card without the need to sign up for PayPal. Note that you must be logged in for the payment and download links to be visible! [Content protected for Jazz Guitarists Series members only]