I recently posted a chord melody arrangement and harmonic analysis of “Tune Up” by Miles Davis. Well, it so happens that John Coltrane was the saxophonist on the recording of that tune. About a decade later he took this interesting 16 measure progression and re-wrote it using a harmonic innovation which has since become known among jazz musicians as “Coltrane Changes”.

In today’s lesson not only am I going to show you the procedure Coltrane employed to write “Countdown”, but I am also going to teach you a chord melody arrangement of it. Let me play and improvise over it first, so you can get an idea of what I’m going to teach you.

I stated in the introduction that Coltrane employed a harmonic innovation to write Countdown which was recorded on the historic “Giant Steps” album. Nonetheless, as much as I love and respect Trane, I feel it is my duty to inform you that he was not the originator of this concept which has become known as “Coltrane Changes”. It was employed for the first time in 1937 by Richard Rodgers on the bridge of “Have You Met Miss Jones“. I also want to add that another earlier source which Coltrane himself gave was a book called Thesaurus of Scales and Melodic Patterns written by composer Nicholas Slonimsky. (Check out link for a preview of my “Slonimsky Concepts” mini-course)

So now that I have gotten those credits out of the way, let’s proceed to examine how Trane transformed “Tune Up” and came up with “Countdown”. We can analyze the regular “Tune Up” chord progression as being entirely in the key of D major with borrowed major 7 chords from parallel minor tonalities. This is what is known as modal interchange. And if you want to understand it in more detail, as well as learn the chord melody to Tune Up, please check out my recent video where I also analyze that piece. The other option is to analyze it as transitional modulations through 3 key centers which is what I am going to do in this instance. 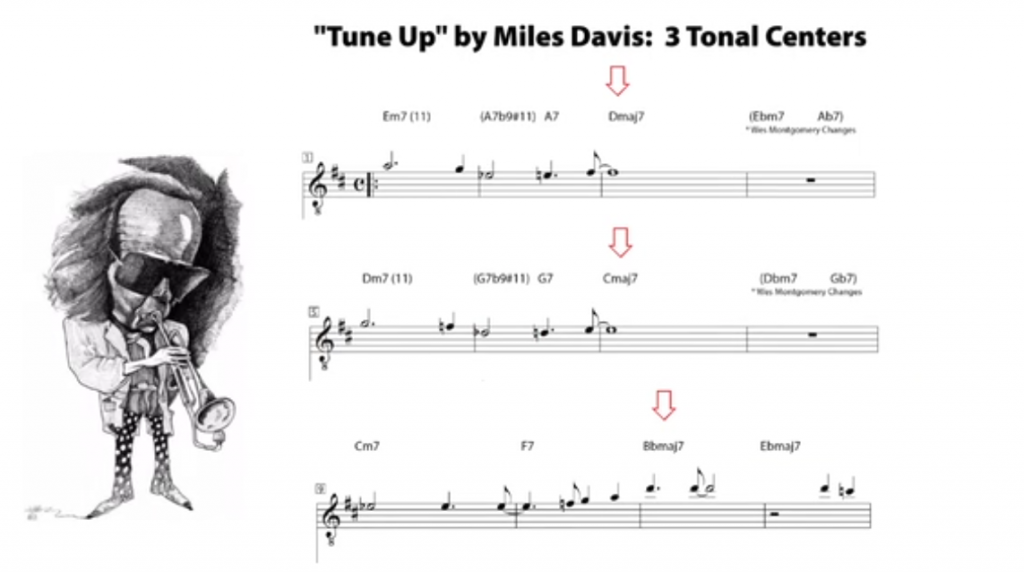 So in a nutshell “Tune Up” consists of 3 II-V-Is descending in major 2nds.

What we see here is the big picture. It’s a macro analysis of the 3 main tonal components of Tune Up. Interestingly enough, Coltrane then inserted a series of micro tonalities within each one of these initial 3 main tonalities.  To understand how he did this, let’s take a look at the first 4 measures of Countdown.

This progression now depicts what is known as the descending cycle of major 3rds. In it any chord will progress through 2 consecutive keys before arriving back at the beginning, which in this case is the key of D. Now let’s take this a step further by backtracking and adding the dominant of each major 7 chord or tonic center in this case.

Notice that each dominant now resolves a perfect 5th down to each new major 7 chord. The dominants now act as chords to smoothly transition and thus modulate between each tonal center. This is very important because in functional harmony the V7 is needed in order to form the V-I cadence which in turn establishes the key center. If we look carefully what we end up with here is the basic foundation for “Giant Steps”. 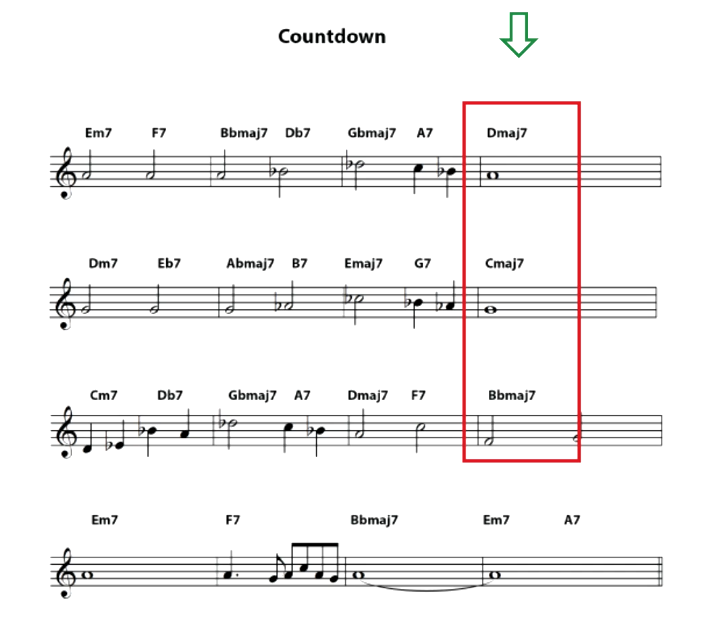 So here we have the entire Countdown progression where we can see the original 3 tonalities from Tune up consisting of 4 measure segments. This is the macro tonal perspective. 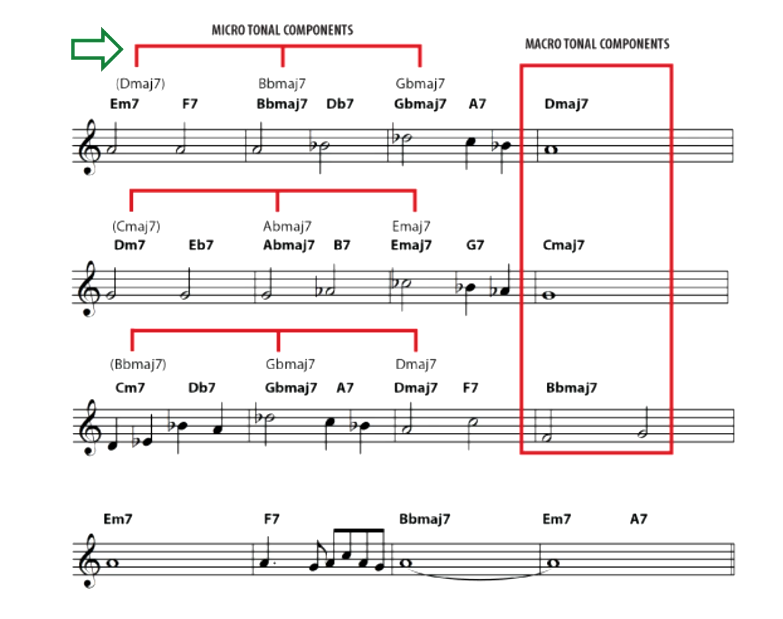 Within each set of 4 measures, we now can see the micro tonal perspective consisting of the Coltrane changes.  In other words, we have several tonal centers modulating within each of the 3 tonal centers!

The Countdown Files can be downloaded for $7.00 or consider the Elite Membership and gain monthly access to ALL existing & upcoming downloads! Your contribution is much appreciated, as it helps support the site and allows me to keep investing the long hours required to produce these lessons. The download includes:  2 PDFs (leadsheet and chord melody) with both regular notation and TAB, an MP3 of the arrangement and a backing track, a Band in a Box File and access to view the entire 20 min instructional video.

For those that don’t use PayPal…when you click the button below, it will give you the option to pay with any major credit card without the need to sign up for PayPal.  Note that you must be logged in for the payment and download links to be visible!