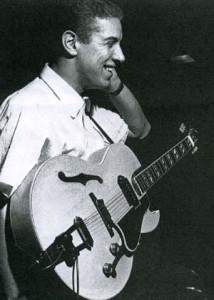 Kenny Burrell was born on July 31, 1931 in Detroit, Michigan to a musical family. Although the youngster initially aspired to be a saxophone player, he finally settled for guitar and started playing at age 12. He is said to have learned technique from watching his older brother Billy who was a guitarist and would let him tag along to his gigs. He cites Django Reinhart and Charlie Christian as early influences.

While attending Wayne University in 1951, Burrell was recruited by Dizzy Gillespie to record with his sextet. As a result, the then “up and coming” jazz guitarist can be heard on Gillespie’s original versions of “Tin Tin Deo” and “Birk’s Works”. After graduation, Burrell toured with Oscar Peterson and then moved to New York in 1955 where he became a consummate session player as well as leader. During this period he recorded /performed as a sideman with the likes of Thad Jones, Tommy Flanagan, Frank Foster, and Frank Wess among others. Throughout the remainder of the 50’s, Burrell released a series of recordings for the Blue Note, Prestige and Verve labels. His collaborations with Donald Byrd, John Coltrane and Jimmy Smith are regarded as quintessential recordings of that era.

In the 1970s Kenny Burrell moved to California and released several recordings on the Fantasy,CTI and Concord labels. Here he started getting involved in music education and offering seminars. He also began teaching a course on the music of Duke Ellington at UCLA where he was appointed as Jazz Program Director several decades later.

In addition to holding a BA from Wayne University, Burrell’s academic credentials clearly set him apart from most jazz musicians of his generation. He has been awarded an honorary doctorate from William Paterson College,is co-founder and president emeritus of the Jazz Heritage Foundation, a member of the American Society of Composers, Authors, and Publishers, and a member of the American Guild of Authors and Composers.

Although originally regarded as a hard bop player, throughout the years Kenny Burrell’s style has become characterized by his smooth melodic blend of jazz and blues. Among his most important contributions to the art of jazz guitar is also his influential role, in reestablishing the guitar as a primary instrument in small groups, particularly trios.